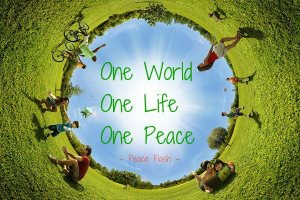 This comment was made by an influential political figure in America. We all know who he is, but I refuse to name him as he gains notoriety and publicity when named. Reminds me of serial killers, mass shooters and other criminals who commit outrageous acts of violence to gain attention, this gentleman does the same with his words.

The sad news is, there are people who actually applaud his sentiment. Lets look at this comment and see where it fits in a world view.

Here are some Wikipedia facts about Muslims. They make up a quarter of the world’s population, number close to 1.6 billion, part of the second largest religion in the world and also the fastest growing.

About 3.3m muslims call America home. In the wake of this call to keep Muslims out, what is to be done with these people? Just the psychological impact of this statement on the millions of Muslims in America must be catastrophic. How insecure must he feel today. He goes to work each day, how does he face his co-workers? How will his co-workers who are probably decent people feel. How much awkwardness is generated?

Then imagine the plight of that Muslim’s child, who goes to school, plays with kids from all walks of life, from all religions and suddenly this one incendiary statement unsettles his world. He is bullied and harassed in school, because kids don’t know any better, and specially if an influential political figure can say such things then it must be right, isn’t it?

Obviously these Muslim US nationals will have family around the world who probably visit once in a while, so with this proposal, these citizens will be unable to invite their kith and kin to visit them in their own home.

The Unites States imports most of the goods it consumes from overseas, including Muslim countries like Indonesia, Pakistan, Bangladesh, Turkey etc. So now will that trade stop? What about business people who visit America to conduct billions of dollars worth of business each year, will they be banned as well? This will send prices of goods soaring at the stores across America. Is the American public ready to pay 2 or 3 times of the cost of goods?

Now lets look at this sentence in the light of the recent Paris attacks, or the Boston bombings or even the 9/11 attacks. How many individuals were really responsible for these attacks? Paris attacks they are looking at about 20 people. The Boston marathon attacks was a more home grown attack and involved 2 people, the 9/11 attacks had about 19 people directly involved. In all 41 people. Lets extrapolate here, lets say these people were helped by at least 3 times the number of people that actually committed the attacks. 123 people in all.

Pause for a second, and think, what are you achieving by being fearful, by reacting like scared puppies? You have a higher chance of being hit by a car than actually dying in a terrorist attack, so calm down. Think how you can contribute to solving this crisis? And don’t think that you can’t help, you can. We all can.

We need to start in our neighbourhoods, in our streets, where we work, where we play. Reach out to Muslim people, get to know them, make them feel welcome, they are just as scared as you are if not more. Islamic terrorists kill fellow Muslims more than any other religious groups in the world. Surprised? Its true.

We need to come together, not build walls to keep each other apart. The walls were there and we have seen wars and misery, in today’s age we have the ability to connect one on one with anyone around the world. Use that ability to bring people closer, learn about their cultures and traditions and tell them about yours. Celebrate their festivals with them and invite them to celebrate your festivals with you. The world that you will build around you will be peaceful, loving and satisfying.

Banish people who choose to create divisions between the common man and his fellow citizens of the world to the trash can of history where their legacies will be writ alongside the likes of Hitler.

Yes, we still have borders and countries, but they are no longer a hindrance in connecting us with another human being on the other side of the planet. We are all a part of one big family.